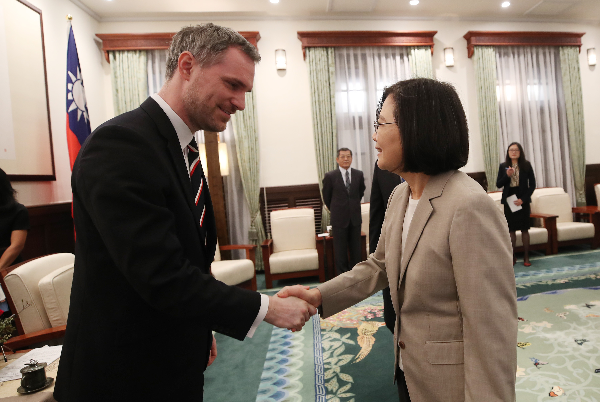 TAIPEI (CNA) -- President Tsai Ing-wen (蔡英文) on Saturday thanked visiting Prague Mayor Zdenek Hrib for his staunch support of Taiwan and said she hoped the relations between the two sides would continue to grow and strengthen.

While receiving Hrib at the Presidential Office, Tsai thanked him and his political party for speaking out on behalf of Taiwan in the international community.

Hrib, a Czech Pirate Party member who was elected mayor of Prague last November, arrived in Taipei earlier this week to attend the Smart City Summit & Expo that was held March 26-29.

In January, he entered the media spotlight after he announced his intention to abolish a clause in the Partnership Agreement signed by Prague and Beijing during Chinese President Xi Jinping's (習近平) visit to the city in 2016, which required Prague to adhere to a "one China" policy and acknowledge Taiwan as an inalienable part of Chinese territory.

Hrib told CNA in a recent interview that the inclusion of Article 3 was a "mistake" and that he would seek to negotiate with Beijing to remove the clause, and if that failed, he would rather terminate the agreement between the two cities.

On Friday, he reaffirmed his intention, telling Taiwanese reporters at the Ministry of Foreign Affairs in Taipei that he thought it was "a mistake of our political predecessors that allowed the Beijing side to drag them into this complicated matter."

At the Presidential Office on Saturday, Tsai told Hrib that the people of Taiwan rejected the so-called "1992 consensus" under which Beijing defines Taiwan as part of "one China," as well as Xi's proposal of a "one country, two systems" model for unification with the island.

City-to-city exchanges should not be based on political preconditions, Tsai said, stressing that such interactions should be based instead on promoting benefits for the people on all sides.

Speaking of the cooperation between Prague and Taipei, Tsai said she hoped the exchanges between the two sides would continue to develop and strengthen, especially in the field of smart healthcare.

President Tsai said she was moved when she learned that Hrib, who studied medicine at Charles University in Prague and visited Taiwan years ago as an exchange student, often reminisced about the time he spent in the country.

"Taiwan is your second home and you are welcome to visit at any time," the president told Hrib.