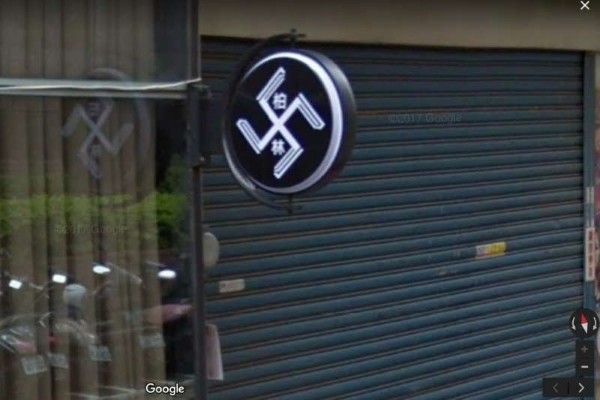 TAIPEI (Taiwan News) -- The owner of a hair salon in northern Taiwan's Hsinchu City has finally decided to cover up signs which had featured a logo strikingly similar to the Nazi swastika, after angry people began urinating and defecating in front of the shop's entrance.

A hair salon, which lists itself on Facebook as "Berlin Hair Salon" and had recently been discovered to have posted two logos on its front entrance which bear a strong resemblance to Nazi swastikas, has finally covered over the symbols with black ink. In an interview with EBC yesterday (Sept. 19), the shop's owner Hsu Chen-yang (徐振洋) said, "In fact, yesterday someone urinated and defecated in front of my door, and caused a lot of trouble, so I covered it up with a magic marker."

Hsu told EBC that as outrage over the logo grew, he started to become worried that his business would be affected, so he decided to use magic marker to cover up what he described as the "four razor symbol," leaving behind only the word "Berlin." As for the future design of the store logo, he said he will discuss it with a designer soon and hopes that the storm will blow over. Salon's logo as it appeared before being covered up. (Photo from Berlin Hair Salon Instagram)

Earlier this week, the GIT issued a statement on behalf of the Federal Foreign Ministry of Germany, which it has forwarded to Taiwan News and reads as follows:

"In regards to the hairdressing saloon in Hsinchu, using Nazi swastika as door signs, the German Institute Taipei states that using Nazi symbols for commercial purposes is a despicable act of offense against the victims of the Holocaust. We call upon the owner of the shop to immediately remove those Nazi signs." The logo, which was posted on two signs on its front entrance, was controversial because it bore a strong resemblance to the Nazi swastika, including the fact that it was right-facing and was tilted at a tell-tale 45-degree angle, unlike the Buddhist swastika commonly seen in Taiwan, which is left-facing.

The Taipei Jewish Center also issued a statement demanding the removal of the Nazi symbol from the salon and criticized the notion of "ignorance is innocence" as being outdated. It also pointed out that the Nazis in the 1920s clearly defined their swastika as facing right at a 45 degree angle, which they used as a propaganda tool to symbolize Aryan purity and to justify the massacre of 6 million Jews, reported Storm Media.

In the review section of the shop's Facebook page, complaints in English and Chinese about the Nazi-like symbolism have started to flood in:

"I haven’t been here, but I will never go. Using Nazi symbols in their logo is extremely inappropriate."

Hsu earlier this week said that the logo has been completely removed from the internet, however, there are actually plenty examples of its presence in the salon's official Facebook page. Mike Hawkenbols submitted this photo to Taiwan News which he says was of an earlier version of the hair salon's logo seen last year featuring the Reichsadler (Imperial Eagle) at the top.