TAIPEI (Taiwan News) -- Another fake kung fu fighter met his match when he was knocked out by a boxer within seven seconds on May 4, a few days after the infamous match between an MMA gym owner and self-professed "tai chi master."

This time, another faux fighter, who claimed to be a disciple of the Wudang (武當) style of kung fu, is shown in a Weibo video being bounded to the turf like a rag doll in seven seconds by a boxer.

In the grainy video titled "Wudang kung fu master fights for traditional martial arts at a fight club, but doesn't last for seven seconds," a man is see wearing a black kung fu uniform with white boxing gloves, while a bare-chested boxer can be seen with bright green boxing gloves. Not to leave viewers disappointed, the boxer quickly goes to work and punches the pseudo kung fu "master" to a pulp.

The video is the latest in a series of videos showing purported "kung fu masters" taking on mixed martial artists and boxers. The previous being the clash between an MMA gym promoter Xu Xiao-dong (徐曉冬) and a massage therapist turned "tai chi master" Wei Lei (魏雷), which ended with the latter being punched into submission within ten seconds.

Nothing is yet known of the current kung fu fighter to be clobbered on video, but the Taoist Wudang monasteries, which housed famous sword fighters going back many centuries, were ransacked during the cultural revolution from 1966-1976 and the resident monks and martial artists were banished from the area.

Thus it is difficult to ascertain the validity of the martial arts lineage of a person claiming to represent Wudang style kung fu in modern day China. If he did in fact train at Wudang, it is a tangible sign of the deplorable state of this once fierce fighting system.

Such style versus style videos provide little in the way of quantifiable data as to the effectiveness of a given fighting system since they are individual incidents. Below is a video showing an opposite outcome in which a Wing Chun kung fu fighter smashes a Muay Thai kick boxer into a mirror: 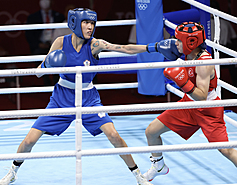