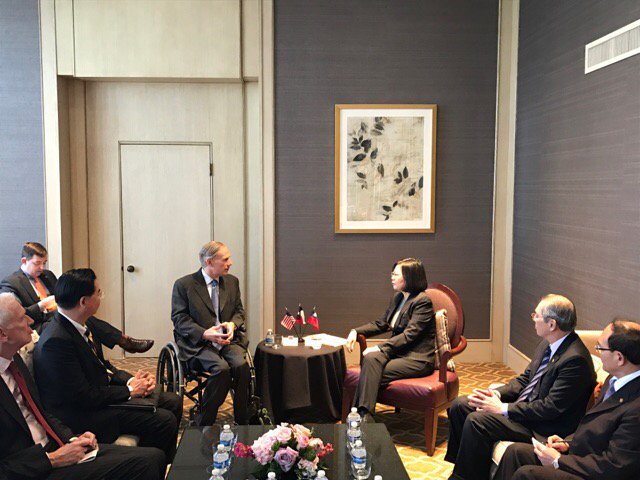 Taipei (Taiwan News) — Texas governor Greg Abbot met with Taiwan president Tsai Ing-wen on Sunday in Houston, where they discussed trade ties and exchanged gifts, though the governor's choice of a clock was untimely.

Abbott says in a statement that they discussed energy, trade relations and commercial ties between Taiwan and Texas. In terms of trade relations, the governor said that the two focused on the exchange of natural gas and agricultural products, of which Taiwan is major consumer.

Tsai presented Abbot with a vase, while the governor inadvertently committed a cultural faux pas by gifting Taiwan's president a clock bearing the Texas State Seal. In Chinese culture the phrase "giving a clock" ( 送鐘) is a homophone with "attending a funeral," and therefore symbolizes an untimely demise for the recipient.

Fortunately, Tsai did not seem to be phased by the culturally inappropriate gift as it was surely well intentioned. The governor described the meeting in a cordial manner saying, "It was an honor to meet with President Tsai and discuss how our two economies can expand upon our already prosperous trade partnership."

Today I met with the President of Taiwan to discuss expanding trade and economic opportunities. #txlege pic.twitter.com/5KF04VlFRA

For Tsai's part, she elaborated on the longstanding trade relationship between Texas and Taiwan and the benefits the state has enjoyed as a result: "In 2015, Taiwan was Texas' 5th largest export market in Asia. Texas has attracted more than US$ billion in investment from Taiwan companies, such as Formosa Plastics, Foxconn, Inventec, and Eva Air.

She then listed the strengths Texas posses which mesh with her ambitions for Taiwan: "The edge which Texas holds in energy, biotechnology, smart machinery, and defense industries overlaps with the 5 major innovative industries which my administration has been promoting in Taiwan."

Tsai also had a meeting that day with Texas Senator Ted Cruz during which they had a "wide-ranging discussion that addressed arms sales, diplomatic exchanges, and economic relations," according to Cruz.

Upon her arrival to Houston, Tsai had been greeted at the airport by Texas Rep. Blake Farenthold, American Institute in Taiwan (AIT) Chairman James Moriarty and Taiwan's Representative to the United States Stanley Kao. Farenthold later accompanied Tsai on tours of Taiwanese-invested Fomosa Plastics Group factories at Point Comfort and Wharton, Texas.