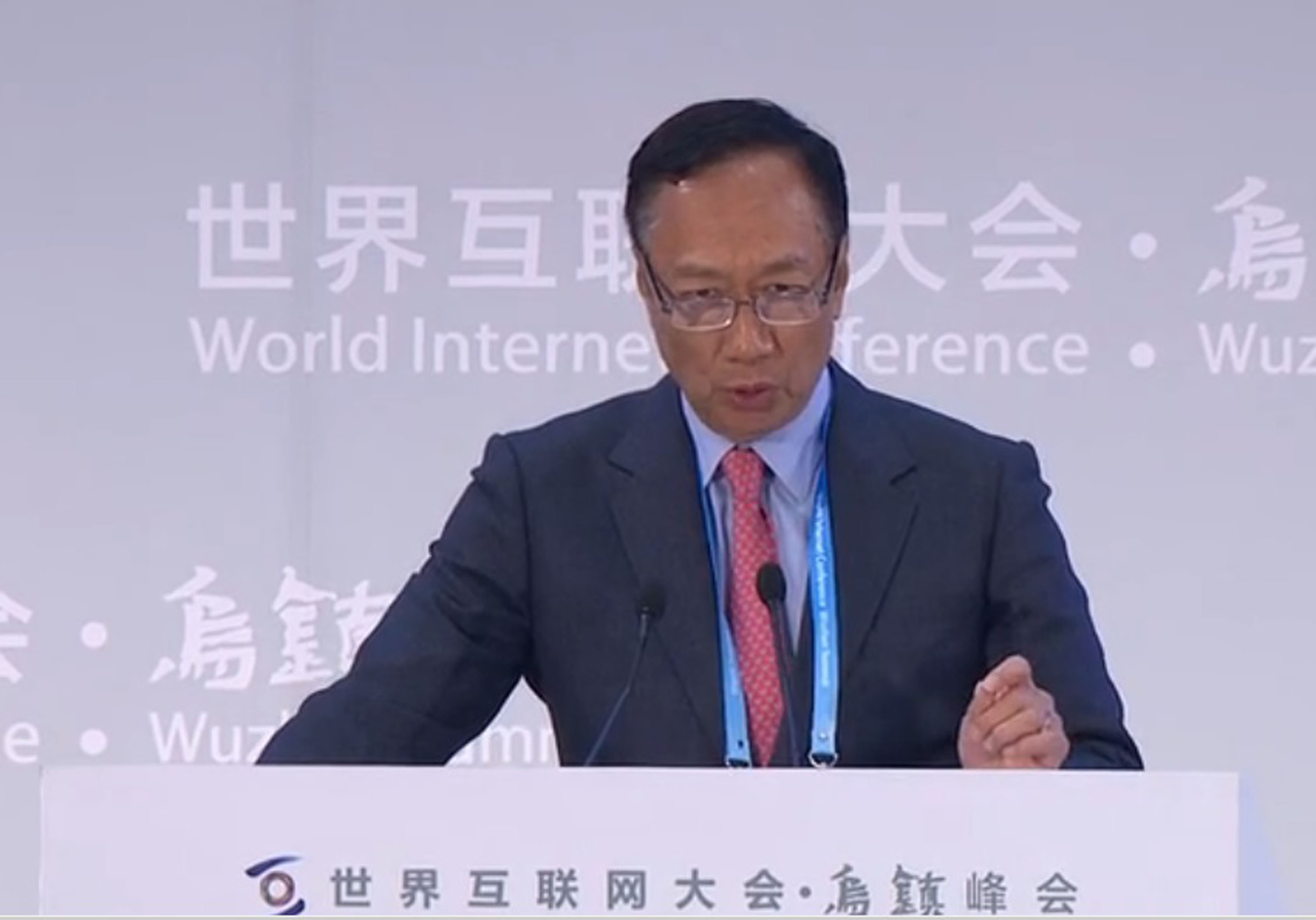 Brash populist Donald Trump has only been elected president of the United States for a week, but media in other countries have already started looking for their own version of a populist leader.

Even though Taiwan just elected its first woman president ten months ago, Hon Hai Precision Industry Co. Chairman Terry Gou has been identified as the potential local version of the next White House occupant.

According to Next Magazine, as the stunning results trickled in on November 9, Gou called a meeting of his top company executives, not merely to discuss the impact of the Trump victory on his business interests, but to sense whether he would be able to make it as a candidate in Taiwan’s 2020 presidential election.

On Thursday, the 66-year-old tycoon quashed the reports, describing them as “nonsense.” At the time he was supposed to be chairing the meeting at the group’s New Taipei City headquarters according to the magazine story, he was actually traveling overseas, Gou said at a conference in China Thursday.

Nevertheless, the report that the businessman might even consider running for president had the media and political worlds abuzz.

Instant online polls saw him way ahead of incumbent President Tsai Ing-wen, and commentators discussed whether he would run as an independent or join the opposition Kuomintang.

The enthusiasm with which KMT Chairwoman Hung Hsiu-chu and senior lawmakers greeted the unconfirmed report, revealed how desperate the party is about its future. Last January, it not only lost the presidency, but for the first time it also turned into a minority at the Legislative Yuan.

The wave of positive comments about the magazine story betrayed a paucity of ideas and an absence of suitable candidates for the presidency which already became clear last year.

While Hung, New Taipei City Mayor Eric Liluan Chu, former Vice President Wu Den-yih and former Taipei City Mayor Hau Lung-bin all might try for a stab at running for the presidency, none of them is seen as having any chance. There is no charismatic leader figure inside the party, which pushed Hung to comment she wanted Gou to join the KMT in order to participate in eventual primaries.

The online poll percentages showing widespread support for the tycoon can be said to be easy to reach when there are no elections looming and when no policies have to be presented or statements made on topics ranging from same-sex marriage to wage levels for fresh graduates.

While Gou does not have to fear lurid revelations about his lifestyle, his business ties to China would form a major drawback. Trump lashed out at the communist country as one of the sources of economic troubles in the U.S. to win votes, but Gou is hardly likely to follow suit.

His China policies might be even more pro-Beijing than previous President Ma Ying-jeou’s, and four years from now that is likely to sit even less well with Taiwanese voters.

While Trump’s business ties with China have already earned scrutiny, Hon Hai’s massive involvement in the communist country’s economy with its factory megacities manufacturing consumer goods for Apple Inc. might put him at the mercy of China’s state-led economy.

The factories have also been the scene of suicides by employees, leading to accusations that Hon Hai, which also operates under the name Foxconn Technology Group, runs sweat shops and exploits workers. As the debate about a reorganized workweek and fewer holidays for labor is raging in Taiwan, Gou’s image is unlikely to draw the working class to his cause.

The tycoon, often listed among the five or ten wealthiest men in the country, will also be largely unable to draw independent voters since his image is closely tied to the KMT. As Hung says, he might not be a member, but his past pronouncements have always echoed KMT policies.

During the 2014 mayoral elections, he clearly took the side of KMT candidates, while when the party faced financial difficulties recently, his mother reportedly came up with a significant amount of funds.

The sudden attention for an eventual Gou candidacy has also been fueled by a lack of patience with government and politics. While the current administration has only been in office for six months, Premier Lin Chuan’s opinion poll ratings have dived fast amid disputes about labor holidays and the import of food from Japanese regions affected by the 2011 Fukushima nuclear disaster.

Even some senior supporters of Tsai’s Democratic Progressive Party have called on Tsai to replace Lin. Her predecessors as president, Chen Shui-bian and Ma Ying-jeou, each had six premiers over their eight years of running the country, and in the end, both of them saw their rivals return to power on a wave of disillusion.

It would be just too fast to write off Tsai and the DPP, or even Lin, as failures. They cannot put right in just a few months what has been wrong for years, or even decades.

The country needs to give its government more time, not hop on the bandwagon of a populist leader. Trump has made it his image to be unpredictable despite his ostensibly Republican leanings, but due to its sensitive international position, Taiwan cannot afford to elect a president who talks a lot without being taken seriously.

In addition to Gou, Taipei City Mayor Ko Wen-je has been compared by some with Trump because of his populist appeal and iconoclastic image. However, his poll standings have been damaged over the nearly two years since he was sworn in, leading some to believe he might not even run for a second term as mayor in 2018.

His personal style and his political independence still receive respect, but a presidential challenge, especially against Tsai in 2020, would be a long shot. By 2024, the DPP will probably have lined up Tainan Mayor William Lai or another prominent local executive to carry the party’s presidential hopes.

Taiwan does not need a populist president who makes grand statements, because, as promises by past presidential candidates have shown, once in power it becomes impossible to turn them into reality.

The government needs to focus on governing effectively, while the opposition must stop dreaming about an election which is still more than three years away, and work as an effective but loyal opposition. Any hope for a Trump-like figure to emerge in Taiwan can only damage social cohesion and put necessary reform even further back.

Taiwan does not need a radical populist in charge, but a levelheaded administrator with a mission for reform.